Launched in 2010, the MS Queen Elizabeth is a’Signature-Class’ Cruise Ship which is owned and operated by Cunard Line. The ship is the 2nd largest cruise ship sailing for Cunard and has a capacity for 2,092 passengers. The ship has been designed with a mix of the traditional combined with modern, updated public areas. The interior decor has many art deco designs, to recreate the 1930’s era of elegant cruise ship travel. The luxurious cruise ship currently ranks third in the top ten cruise ships in the world. Queen Elizabeth presently sails all year round and offers cruises around The Mediterranean, the Caribbean and other worldwide destinations. 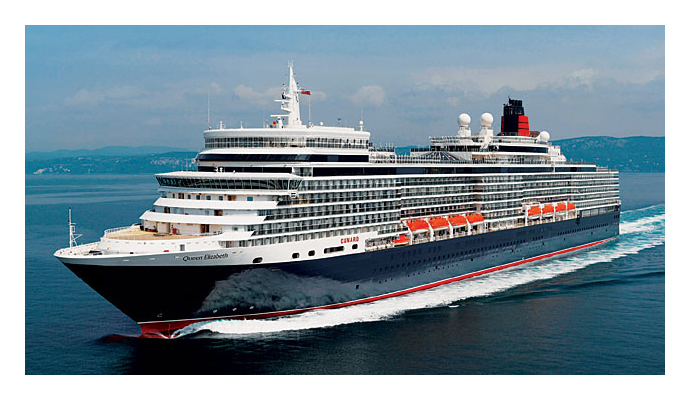 Continuing cruising tradition. the Queen Elizabeth offers traditional dining in elegant surroundings in the 4 main dining rooms. The exclusive Queens Grill Restaurant offers luxurious dining in an elegant and sophisticated environment. The a la carte menu and impeccable waiter service ensure passengers enjoy the ultimate dining experience. Passengers can choose from dining inside the air-conditioned restaurant or al-fresco on in the beautiful courtyard.

Other dining options include the exclusive Veranda Restaurant for an alternative dining scene. Prepare yourself for a treat with the exquisite french cuisine which is prepared to perfection by the award winning chefs. The Queen Elizabeth also offers 24 hour room service for when guests choose to dine in the comfort of their own cabin or private veranda.

Queen Elizabeth offers a host of activities and relaxation for passengers to choose from. Various sports and fitness are on offer for passengers of all fitness levels. Enjoy a workout in the fully equipped fitness centre, take a leisurely stroll around the promenade deck or partake in a game of tennis and various deck sports. The Queen Elizabeth also offers various dance classes for passengers to learn the tango, waltz, jitterbug, ready to dance the night away!

When it comes to relaxation, the Queen Elizabeth is in a class of her own with 2 swimming pools, 4 whirl pools and the exclusive Royal Spa which offers massages and various other rejuvenation treatments to soothe both the body and mind. Other exclusive features include art gallery, bookshop and the Royal Arcade which offers bargains with designer clothing, bags and gifts.

The Queen Elizabeth also has various kids clubs to cater for children from 2-17 years old. Teenagers will adore the Teen Zone which is an exclusive area designed specifically for teenagers with table tennis, deck sports, disco’s, pizza parties and competitions.

This site uses Akismet to reduce spam. Learn how your comment data is processed.

Join our other members and get cruise news, special deals and updates from the forums.

Cruise-Reviews.co.uk is a new cruise forum for UK passengers to review cruise ships that they have been on. As a community led project we aim to offer full transparency and carry no advertising.